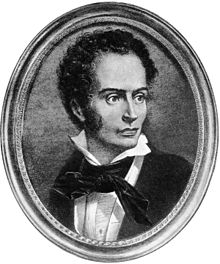 René Laennec would be 235 today.  He invented the stethoscope in 1816 while working at the Hôpital Necker .  Although the stethoscope has evolved since Lannec day it is still one of the most recognised items of medical equipment.

Made of wood and brass, this is one of the original stethoscopes belonging to the French physician Rene Theophile Laennec. It consists of a single hollow tube. The familiar binaural stethoscope, with rubber tubing going to both ears, was not developed until the 1850s.